THE NEW PACKAGE IS HERE!

It's our hippest package ever with everything completely redesigned and color-coordinated in very stylish black & white.

New this year is "A Day In the Life of Dr. D.," a booklet with fascinating pictures of Dr. Demento making his rounds. See the Doctor visiting Rhino Records, the show's distributor On The Radio Broadcasting, the post office and the gas station. See Dr. Demento live on the air, and hanging, out with "Weird Al" Yankovic, Barnes & Barnes and Henry Phillips. See Musical Mike, Whimsical Will and Goodtime Gil. And, as a special bonus, see Dr. Demento in the Doo Dah Parade (page 2).

We've also got a brand new button, bumper sticker, and membership card ... and of course that all important bonus CD (or cassette), Dr. Demento's Basement Tapes No. 5.

This year's Basement Tapes has current hits from the show like "Dungeons and Dragons," "In My Country," "Four Years of High School Spanish," "Pull My Finger," "Save The Beer' and "It's a PMS Kind of Day," along with several rare blasts from the past. A special highlight is the original recording of "Squirrels" by The Beastly Boys, a frequent Funny Five favorite since 1987 which has never been available before, anywhere.

Once again, "Weird Al" Yankovic has graciously supplied a never-before-released tape from his private archives, this time a terrific live performance of a song he's never released on record, tape or CD.

As usual, there are a couple of special gems from the Doctor's stash of vintage 78s: "Do You Believe Me - I Do," a funny and touching duet by the immortal George Burns and Gracie Allen, and one of the very funniest early-day "stand-up" comedy bits, "No News, Or What Killed the Dog" by Nat M. Wills, There are also a couple of Demented Christmas treats, neither one available anywhere else: "I Want A Blow-Up Doll For Christmas" by Arnie Aardvark and "Happy Whatever You're Having" by The Therapy Sisters. There are 23 tracks in all, with well over an hour in total playing time. All that for only $17.98 (in the USA)! Renew before Dec. 31 and save a buck. Remember, you can renew your Society membership at any time and receive the new package right away; an extra four issues will be added to your present Demento Society News subscription. 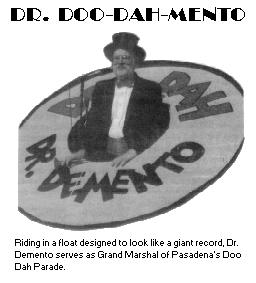 On November 24th, 1996, Dr. Demento served as Grand Marshall of the 20th annual Doo Dah Parade in Pasadena, Calif. The Doo Dah Parade, which follows a portion of the route used by the famous New Year's Day Rose Parade, is to parades what the Dr. Demento Show is to radio: a celebration of joyful insanity. Participants included the Lil' Angels Pug Rescue and Accordion Band, the BBQ and Hibachi Grill Team, the Rhino Records Chainsaw Marching Band, the Moron Tab'n'Apple Choir, and the Claude Rains Memorial 20-Man Invisible Marching Drill Team, plus Dread Zeppelin (that's the band that plays Led Zeppelin covers in reggae style with an Elvis impersonating lead singer).

Dr. Demento was the first Celebrity Grand Marshall in the parade's history. Several TV networks flashed his picture n nationwide during their coverage of the event.

We were very saddened to hear of the sudden death of Tiny Tim on November 30. He collapsed while singing at a fund- raiser in his adopted hometown of Minneapolis (in the same ballroom where, at age 14, I learned the fox trot, rhumba and Lindy Hop). He was probably in his late sixties.

Though the general public may think of Tim as that benign freak who had his 15 minutes of fame in the 1960s, we recall him as a warm and courtly gentleman who was totally devoted to the heritage of American popular songs, of which he knew 10,000 or more. "I'm not really a performer," he once told me. "I'm a song plugger" -- referring to the people who demonstrated new songs live for music publishers in the days before prerecorded demos took over. It was his way of saying that the song was what mattered

Nevertheless, many people were enchanted by his unique way of performing, and his audience was growing again in the 1990s. He totally charmed several audiences on our 20th Anniversary tour and TV special. His mid-1996 CD release Girl was his best album since 1968's God Bless Tiny Tim, and a beautiful Christmas CD was released just days before his death.

The last song he sang was "Tiptoe Thru' The Tulips." He collapsed in the arms of his recent bride, Miss Sue, with whom he'd found new peace and happiness. "I think the last thing he heard was applause," she said. "The last thing he felt was my arms around him."

We are proud to offer Stan Freberg Presents the United States Of America in our catalog. This is a two CD package which combines the complete original 1961 album (which Dr. Demento calls "the greatest history album in comedy, or the greatest comedy album in history -- maybe both") with the newly recorded sequel which brings Freberg's comedic story of our nation up to the World War I era. The set comes with a booklet featuring many rare photos, plus notes by Dr. Demento, Ray Bradbury, and Freberg himself. CD only - $27.98 -- use our handy order blank.

HENRY PHILLIPS: On the Shoulders of Freaks
Henry Phillips is the funniest young singer-songwriter to come our way in quite a while. His songs typically begin with sweetness and light and sneakily metamorphose into exhilarating vortexes of utter mayhem. The tide song is a fascinating catalog of the odd personal habits of Western cultural heroes; other subjects range from governmental excess to auto- eroticism. His humor leans to the dark side but he doesn't overdo it like so many others do. He's a fine singer and guitar player as well. His independently-released CD is part studio, part live, nicely produced, and highly recommended. $11.98 postpaid - Henry Phillips, PO Box 12598, La Crescenta, CA 91224-5598.

Three from Up Nort'...
DA YOOPERS: We're Still Rockin'
The most famous band in all of Ishpeming, Michigan has gone through a major personnel change and emerged with a CD that's quite different from its predecessors. Gone is that quaint Yogi Yorgesson sound and most of the stuff about deer huntin' yokels. The new Yoopers are more contemporary, more electric, though they still have a distinct small-town charm to their music. Their lyrics are still refreshingly lacking in urban "cool," and often quite funny. Note: a couple of songs dealing with the processes of puberty are fairly graphic! Phone 1-800-628-9978 or fax 1-906-485-5039 for a catalog.

BANANAS AT LARGE: Turdy Point Buck 11: The Sequel
Over in Amherst Junction, Wisconsin, Bananas at Large still have both barrels aimed at their original deer huntin', football crazed fandom. But they too have gone contemporary, with high tech multi- track studio sound, and lots of rapid-fire gags and sound effects. "Turdy Point Buck II" won't quite replace the original, but if you know anyone who's really into ice fishing, they must hear "Da Shanty Zone," the Bananas' 16-minute Twilight Zone spoof. Phone 1-800- USA-1944.

SHAD-RAPP: Double Barrel
Two big differences between Shad-Rapp and their rivals on the Upper Midwestern scene: Shad-Rapp raps, fairly convincingly, and the hunters in their songs actually kill what they're hunting. Not for animal lovers... but real-life hunters should like this just fine, if they can handle the hip-hop. Shad-Rapp, PO Box 2631, Appleton, WI 54913.

PAT GODWIN: Reindeer Games
"Santa, Welcome To the Modern World" and other entertaining originals and parodies about Christmas in the 1990s. A revised, improved edition of an earlier release with the same title and cover photo. (Rage 'n Records, 212 N. 12th St., Philadelphia, PA 19107)

VARIOUS ARTISTS: Blame It On Christmas
Purporting to be a collection of tracks from Christmas LP's of earlier decades, it's actually a subtle spoof, newly recorded. Try it on your friends and see who catches on. (Schoolkids Records, no address shown)

VARIOUS ARTISTS: A Really Swell Christmas
This, by contract, is the real thing, charming kitsch from the 1950s and 1960s. Art Carney's "Santa and the Doodle-Li- Boop" is a treasure. (Columbia ... in stores)

TEEN ANGELS: Sock Full O' Santa
This low-budget production has one hilarious track, "A Boy Named Santa," and several others that'll help you smile through the holiday hassle. (Teen Angels, 1-810-293-2471)

The price is just $1.00 per issue, plus $1.00 PER ORDER for postage and handling. No shipping charge if ordered with CD's, T-shirts, etc.

If the numbers 109 or 110 appear on your address label, your membership has expired or is expiring, and this is the last Demento Society News you will receive.

RENEW NOW and get the all-new 1997 membership package, with great Demented music and comedy including "Squirrels," "Dungeons & Dragons," "In My Country" and a never-before available song by "Weird Al" Yankovic. The package also includes a personally autographed photo of Dr. Demento, plus a photo booklet of "A Day In the Life of Dr. D.," a button, bumper sticker, membership card, a coupon good for 10% on a future purchase of CD's or other goodies, and four more issues of the News. Get another year of laughter for just $17.95!

IF THE DR. DEMENTO SHOW IS NO LONGER HEARD IN YOUR AREA...

WRITE to the PROGRAM DIRECTOR at one or more of the stations you listen to and say how much you'd like to hear the show. (A letter is more effective than a phone call). If the show was heard on a particular station until recently, be sure to write that station.

GET YOUR FRIENDS TO WRITE LETTERS TOO. Get a bunch of them to sign a petition! Many radio executives are simply not aware how many people enjoy Mad Music and Crazy Comedy. Let 'em know!

SEND FOR OUR FREE CATALOG